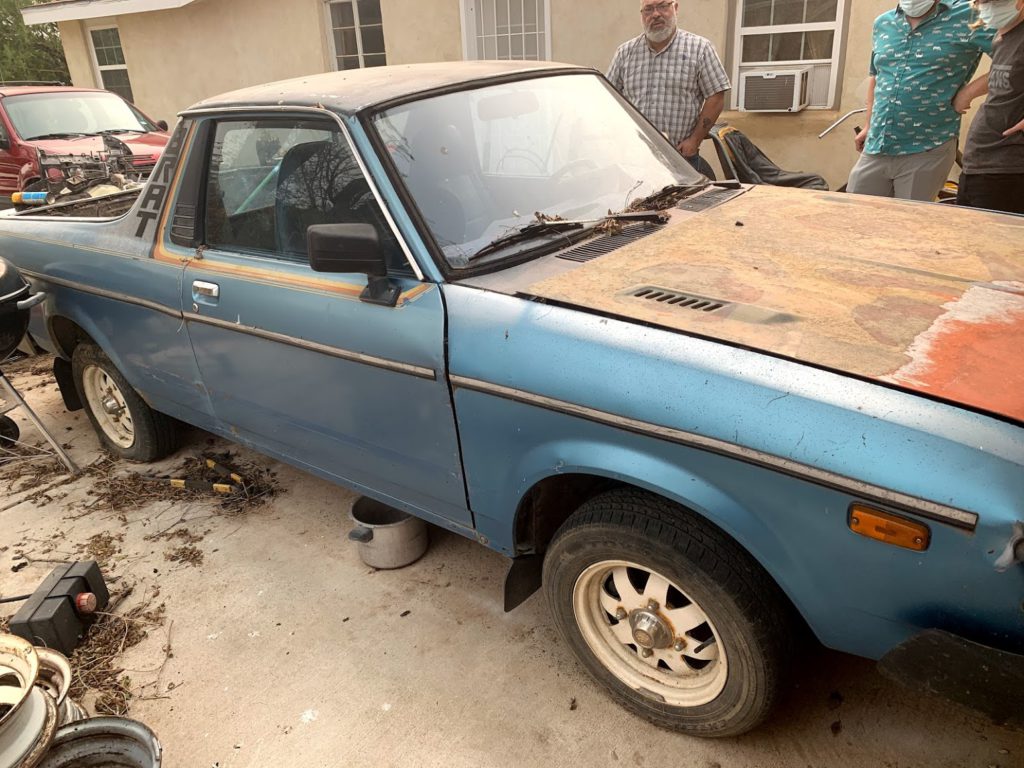 The Subaru Brat has always been considered a little quirky.  Is it a truck?  Is it a car?  Was it made for economy, or was it created as an off-road vehicle?  The truth is that car culture loves quirky little cars that break the mold.

The BRAT has always been one to break the mold.  Even from the very beginning, the BRAT was a rule breaker.  In fact, the reason BRAT even exists was to break a few rules – what is more rebellious than a little creative tax evasion (See: Chicken Tax).

Parked for over almost a decade, the West Texas sun took its toll on the original Miami Blue metallic paint, which was faded to bleach white on the upper panels.  The gaudy graphics didn’t fare much better.  They were sun-checked and faded to the point that the marquee BRAT insignia was nearly unreadable.

Under the hood the little 1600 CC flat-four with its single barrel carb and tangled web of cracked, cut, and randomly disconnected smog-era vacuum hoses, were still there waiting to foil any would-be mechanic from ever again churning out the original 63 horsepower.

The radiator was suspiciously missing, leading one to wonder what actually made the current owner park the little BRAT.

Opening the door to the BRAT revealed the obligatory blue interior, which was remarkably untouched, with its original blue vinyl seats with blue plaid inserts and simulated wood grain.  (Nothing screams 80s more than blue vinyl and matching plaid.)  Unfortunately time and previous owners had claimed the most famous (or infamous) part of the BRAT – the plastic rear facing seats.    Despite the condition, the owners of Flashdrive Motors decided that this BRAT deserved a second chance. 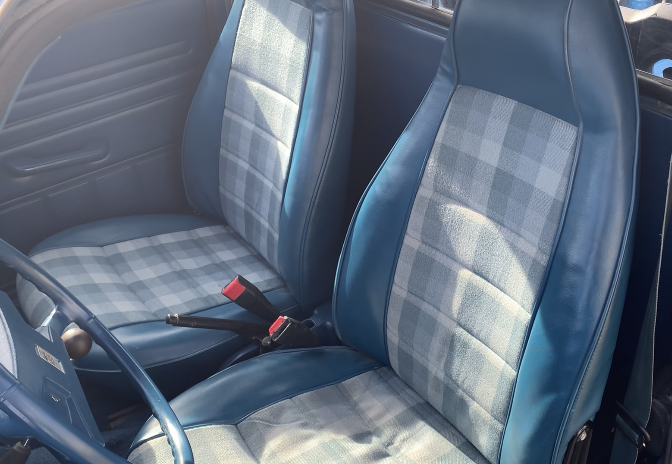 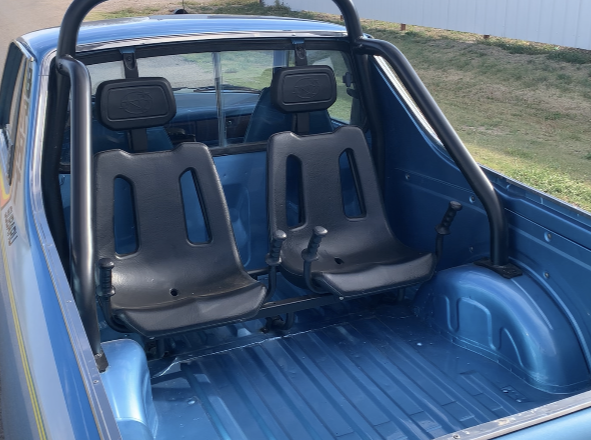 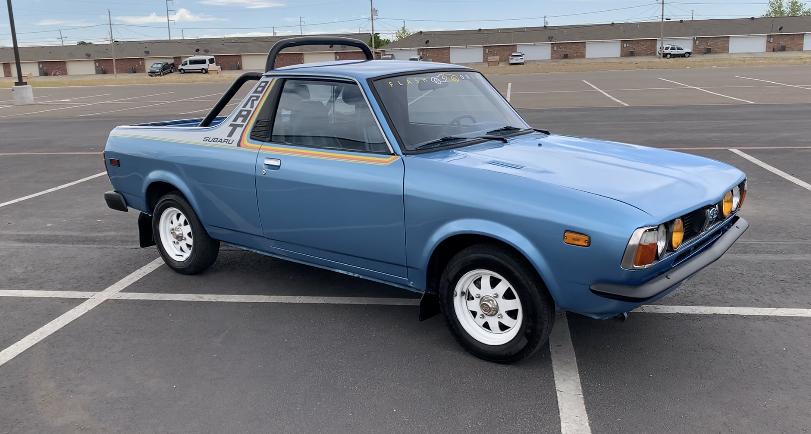 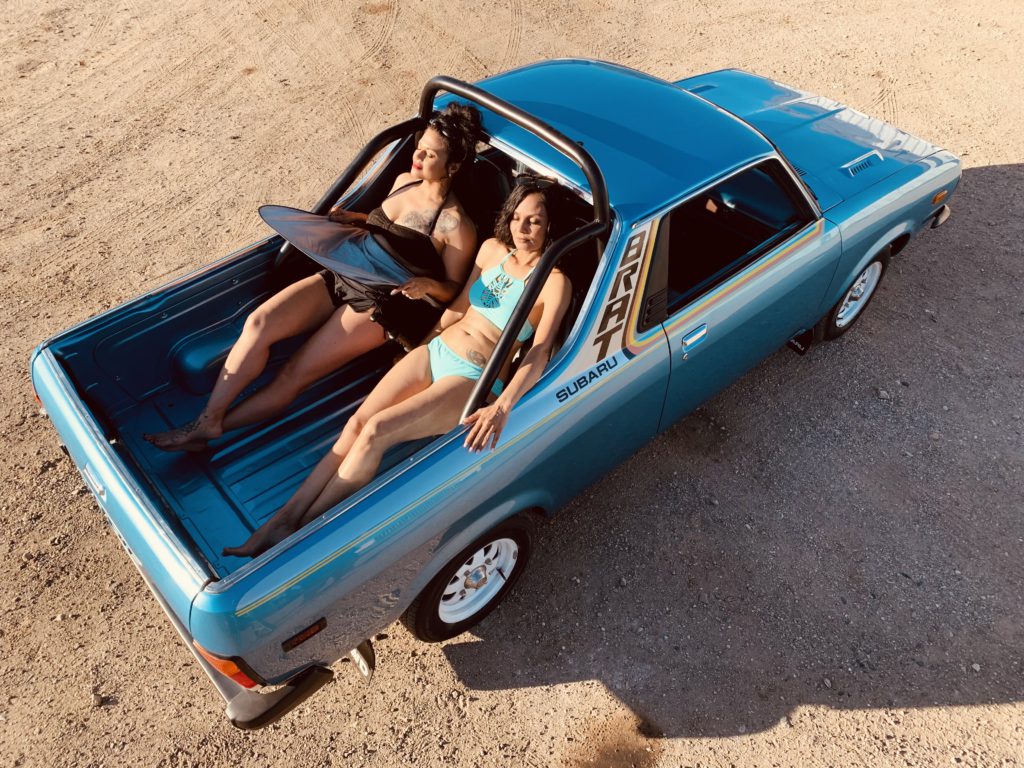 The brothers at Flash Drive motors are no strangers to taking someone’s forgotten and neglected vehicle and turning it into a show-stopper.  In fact, this BRAT couldn’t be in more capable hands.  The brothers have brought back Edsels, Fairlanes, Chevelles, Mustangs, and even the occasional Datsun from certain death.  However, the brothers had grander things in mind than returning the BRAT to factory-like-new condition.   The brothers had an idea to bring the BRAT into the 21st century.  In fact the idea was to build the world’s first all-electric 1st Generation Brat.

The project started like most restorations; stripping the car, assessing the years of damage, and finding missing parts.

The first items that needed sourced were those original rear-facing seats.

After weeks of searching and many phone calls, emails, and forum posts, a set of seats was finally located in Texas, albeit four hours from the shop.

The seats were purchased and refurbished to like new condition, along with the original headrests and rollbar.

Before the seats could be reinstalled, Flash Drive Motors spent over 100 hours removing the nearly 40 years of dents, dings, rust, and mouse nests from the body.

Once the clear coat was applied, you could almost smell the tropic suntan oil and picture the blue waves gently rolling into Miami white sand beaches for which the color was named.

Following application of basecoat and clear, the body was cut and buffed to a mirror-like finish.  The original white spoke rims were reinstalled with fresh 13” tires.

The finishing exterior touch was the addition of the original BRAT vinyl graphics and matching 4×4 mud flaps.

Up to this point the restoration process of the BRAT was fairly conventional, if restoring a Subaru Brat was ever a conventional idea.   But this is the point where the brothers at Flash Drive Motors decided to add some spunk and a modern flair to the once anemic Subbie.

The original motor was tossed and replaced with a modern power plant.

The power plant of choice was a compact, yet powerful Hyper 9 from NetGain Motors.

Yes, that is right, Flash Drive Motors converted this BRAT to all-electric.

The decision to do an electric conversion was easy one.  The new power plant was capable of doubling the original output of the internal combustion engine without the headache of oil changes, leaky carbs, and poor driveability that plagues classic cars.

The hardest part of the conversion process was the decision to retain four-wheel drive.  Retaining four-wheel drive required a custom made adapter coupling the Hyper 9 motor to the original 4 speed manual transmission.

The use of the original gearbox was critical to retaining the four-wheel drive feature of the BRAT.

Flash Drive Motors knew that the BRAT name signifies Bi-Drive All Terrain, so 2WD was not an option.

The fuel source needed to supply the necessary 120 Volts for the new power plant is 5 Tesla battery packs sourced from a salvaged Tesla Model S.

The batteries are recharged using an ElCon 3.3kW charging unit. 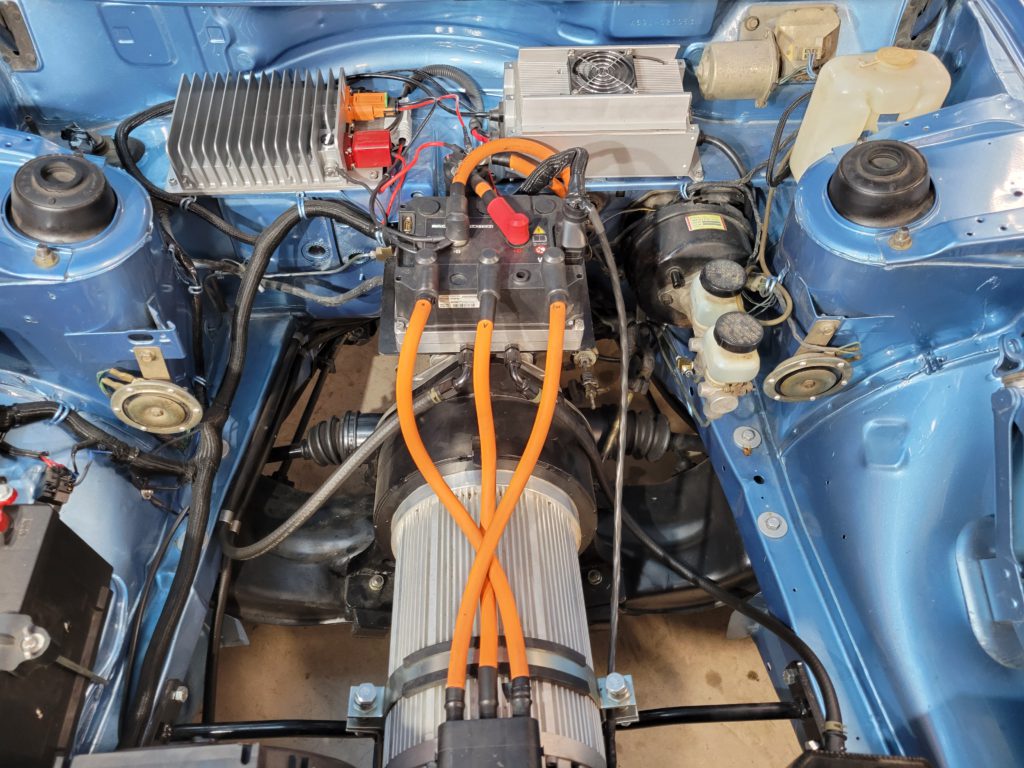 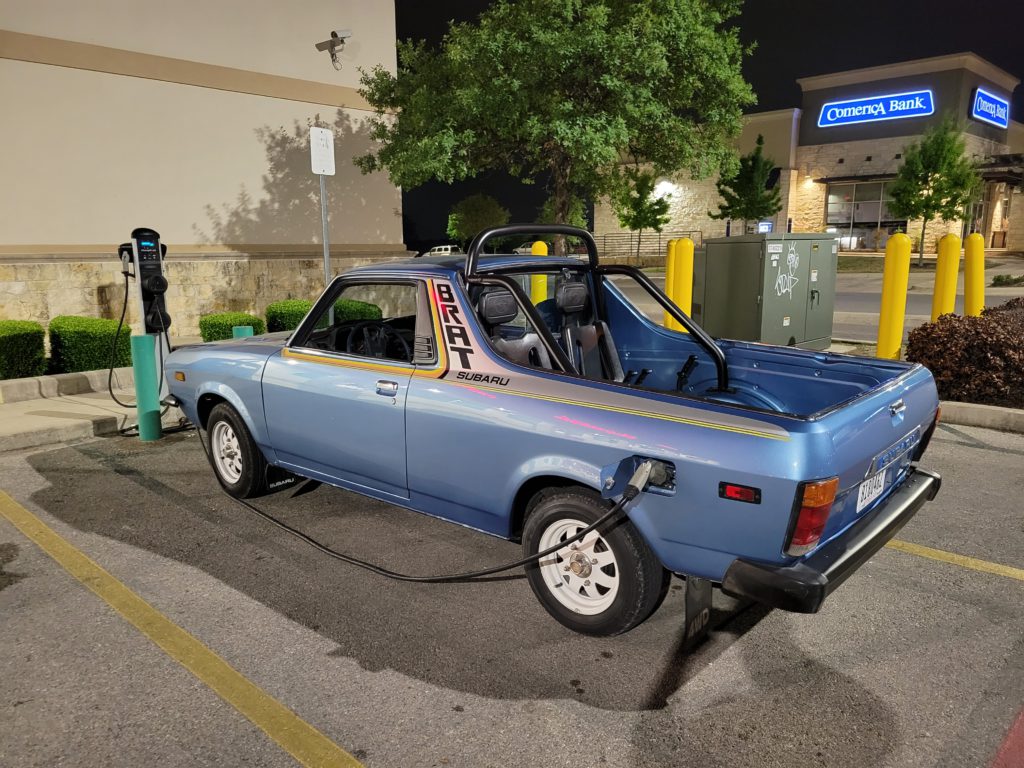 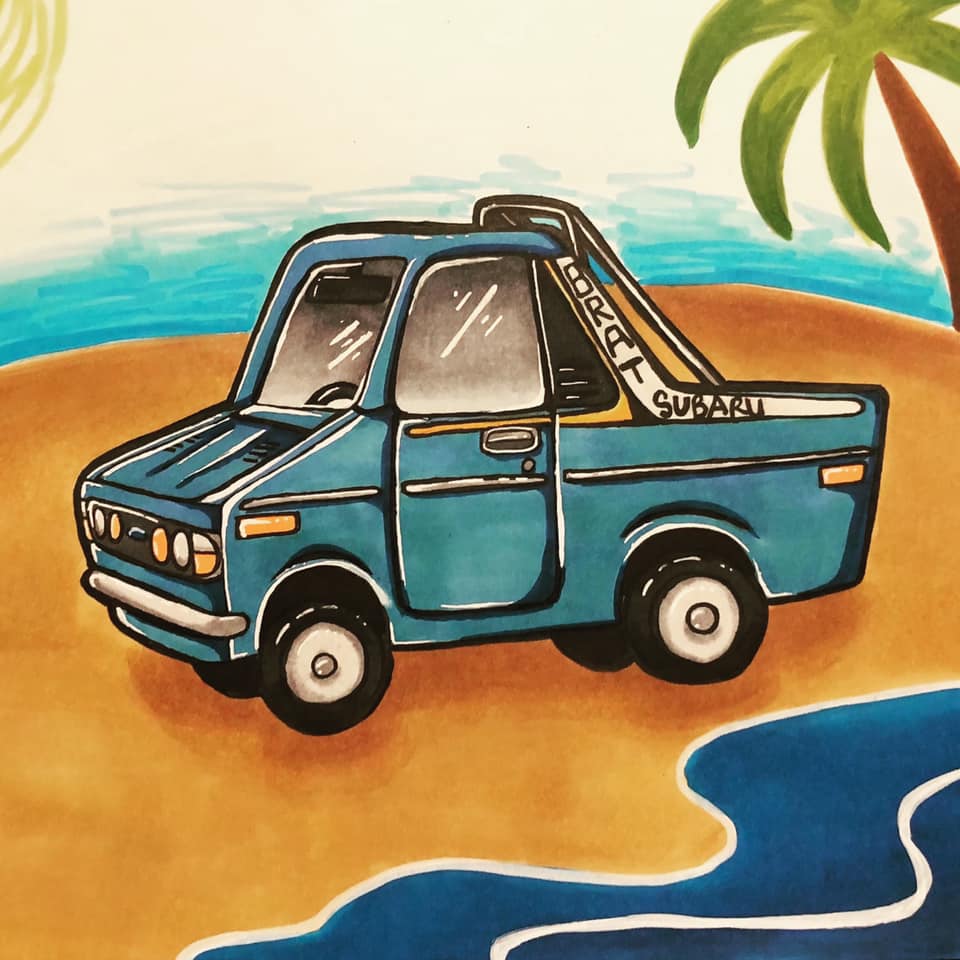 Following the EV conversion, the EV Brat is ready for road tripping and testing.

Performance from the original is drastically improved.  Zero to 60 times are now near that of a muscle car rather than a tortoise.

Quarter mile times are equally improved, although the 4.09 gear ratio and 13” tires limit the top speed.

However, the brothers have achieved the magical 88 MPH just to see what would happen (you are welcome Doc Brown).

The range is around 100 miles on a typical charge under normal driving conditions, but there might be some more miles left with the addition of the regenerative braking.

The quiet and easy operation of the BRAT has enhanced the driving experience and the instant power makes it fun to troll on unsuspecting diesel trucks.

Next time you roll up on a little blue Subaru Brat at an intersection be wary…it just might be packing a high voltage punch that could silently surprise you.